Sam Stosur is a professional tennis player from Australia. She won her first major at the 2011 US Open and is now ranked inside the Top10 on the WTA Tour. Her game is built around a big serve and her heavy topspin forehand!

Stosur In One Of Her Best Matches
Big Serves And Heavy Forehands!

Stosur was born in 1984 in Brisbane, Australia and started playing Tennis at the age of 8. She progressed quickly and competed in international junior competition already at the age of 13.

She turned pro in 1999, but it took her until 2003 to win her first match on the WTA Tour. Previously, she competed in smaller professional events. In contrast to many of the other star players on the women’s tour, Stosur developed slowly and only reached the Top30 in 2006 at the age of 22.

Sam has improved steadily over the years, which led her to enter the Top10 for the first time in 2010 at the age of 26.

Her biggest triumph so far came at the 2011 US Open, where she upset Serena Williams in the finals to become the champion!

Sam Serving In The US Open Final
Just Before Her Big Triumph! 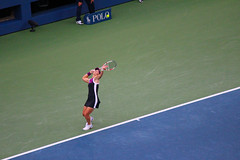 In her early years on tour Sam was known to be one of the best doubles players in the world. In fact she reached the number 1 world doubles ranking in 2006 and also won the WTA Tour Championship tournament at the end of that year with Lisa Raymond. Nowadays her focus is on singles though!

Her favourite surface is clay and in 2010 she reached the French Open finals by defeating Justine Henin, Serena Williams, and Jelena Jankovic in consecutive rounds!

Sam Stosur is a very athletic player with an offensive game build around big serves and forehands!

Check Out Sam Hitting Some Groundstrokes
She Gets A Real Nice Pop On Her Forehand!

Stosur has very good technique on all shots except for her backhand, which is a bit shaky at times!

Sam Stosur has one of the best forehands
in the women’s game!

She sets herself apart from the other players because she can hit a heavy ball that is hard and has lots of topspin. The only other female player I can think of that was able to hit that kind of a forehand is Justine Henin!

So what makes this forehand so good ?

To begin with Stosur has a really good swing path, taking the racket from high to low to high. Her motion is very short and compact. But the reason for the heavy ball is somewhere else. Have a look at this video clip:

Sam Stosur uses an extreme pre-stretch of the forearm muscles, very similar to how all the top players on the men’s tour do it!

In the video you can see that just as she is starting to swing forward, her racket moves back and the tip of her racket almost points to the side fence!

This is the so-called lag effect. A lot of energy is stored up in the forearm muscles, which is then released on the move forward to the ball. The result is tremendous racket acceleration and a heavy topspin shot!

I believe that we will see more and more female players use this kind of a forehand similar to the male players. One thing to keep in mind though is this: It is extremely difficult to learn this move and still hit the ball clean. Therefore, I usually do not recommend recreational players to imitate this!

The backhand side is Sam Stosur’s weakness. She tends to hit it short and also makes quite a few unforced errors with it!

From a technical standpoint there are a few things to look at on her backhand. It seems like her left hand is pretty far down underneath the handle of the racket. Unfortunately, this is very tough to see on the videos that I looked at.

When you have the left hand too far underneath it makes you swing a bit more outside in. It is tougher to get good extension that way and that would make sense since Sam does not get very good depth on her backhand!

She tends to hit the shot with a lot of spin and leave it too short. The best players in the world will always punish those kinds of shots!

Another issue with her backhand is that at times she tends to move her head too much around the time she makes contact with the ball. This of course leads to mishitting balls. Reasons for this can be either a technical problem before the contact zone or simply a lack of confidence in the backhand. Oftentimes players will move their head too early to look where the shot is going especially on those strokes that they do not have 100% confidence in!

Sam hits a pretty good slice backhand. It is not a real weapon and doesn’t skid through the court like Steffi Graf’s slice did back in the days, but it doesn’t sit up that much either. The shot allows her to stay in the rally in situations where she is not comfortable hitting topspin backhands!

Sam Stosur is one of the best net players in the women’s game!

She has had a lot of success in doubles and certainly knows how to play the net.

She manages to stabilize the racket head on both forehand and backhand volleys and her racket face is not too open. As a result she can stick those volleys. She also possesses a very good overhead and good movement around the net!

Stosur has a great service motion and it is a big weapon!

She is the only woman on tour that can hit a real heavy kick serve, which troubles a lot of her opponents!

Look At The Serving Clinic Stosur Puts On Here!

Looking at her serve you can see that she has a very fluid arm action, which is a key characteristic of great servers! Her arm never stops and it reaches all of the key body positions, resulting in maximum racket acceleration.

She likes to toss the ball to the left even on her first serves. This gives her the option to hit the kick serve on the first serve as well but it also makes it tougher for her to slice out wide in the deuce court or hit a slice to the forehand from the ad court!

This is another great video to see how fluid her motion is. Also you can see that she gets into a really good (deep) racket drop position, which is another key for power on the serve!

Sam Stosur’s tennis game is built around big serves and forehands! She is also very athletic which allows her to run around her backhand a lot to use that heavy forehand.

Most opponents are not used to this heavy topspin because it is rather rare on the women’s tour. Stosur also sets up her serving strategy accordingly. She tosses the ball to the left even on her first serve, which allows her to hit flat as well as heavy kick serves on the first serve. This is a great strategy against women that are not used to returning really heavy kick serves! Opponents will of course adjust their return positioning to this serving strategy.

I believe Stosur would be even more effective with this if she would serve and volley occasionally!

Being a very good doubles player, she knows how to play the net and adding the occasional serve and volley should make it even tougher for her opponents to find a good return strategy against her!

The other tactical advice I would give Stosur is to start hitting a flatter more penetrating forehand whenever the situation allows it. She is confident in working the point with her topspin forehand but against great movers like Wozniacki or Clijsters for example she has trouble getting past them and allows them to get back in the rally too often.

Another big improvement to her game would be to come to the net more. Finishing off points by taking balls out of the air is key against players that move extremely well these days and I don’t know why Stosur doesn’t do it more often!

Sam Stosur is one of the fittest players on tour for sure!

Just looking at her you can see that she is a superb athlete. This is one of her biggest strengths on the tennis court!

The mental part of the game has been holding Stosur back in the past. At times she was not able to handle the pressure and her performance could get really poor under pressure with lots of unforced errors. Even in 2011, just a few months before her US Open title she was in a bit of a slump and lost a lot of matches.

In the 2010 French Open she played phenomenal on her way to the finals, beating Henin, Sharapova, and Jankovic in consecutive rounds. In the finals though she played poorly when it really mattered and definitely showed nerves once again.

I don’t know enough about Stosur to make a guess to what the reasons are for her nerves, but it is certainly the area that she needs to work on the most!

Her US Open victory could prove to be a big stepping stone in overcoming those nerves as well.

Sam Stosur still needs to prove that she has the mental stability and confidence to be a top player day in and day out. She certainly has the physical and technical abilities!

There are three areas of her game that I would advise Stosur to work on.

The first area to work on would be the mental part. Now this is a bit tricky and very individual for every player. Maybe she should try working with a sports psychologist or she can work with her current coach on this area, but she needs to develop the belief and confidence of a true champion in order to establish herself as a regular Grand Slam contender!

The second thing to work on would be her backhand!

As mentioned above, some technical work is required to improve this shot. If you know what you are doing this shouldn’t be too hard though!

And last but not least I would strongly advise Sam Stosur to come to the net on a more regular basis. Mixing in some serve and volley would be a great idea and following up strong shots from the baseline to finish off points at the net should make life a lot easier for her!

With these minor adjustments Stosur would be even stronger and should have the ability to win a couple more Grand Slam tournaments!